No Time For Heroics

A podcast about superhero movies, and some not-so-super hero movies. A funny, critical look at heroic fiction on screen from Republic serials to Imax blockbusters. If tights, capes, and close reads of pop culture are your thing, you're in the right place. New episode every Tuesday!
Email RSS Feed
No Time For Heroics
2018
June
May

Get ready for some high stakes espionage action as Andrew and Anthony welcome back Pepper Pistolwhip, (in her disguise as mild mannered Jill Butler) to talk about Captain America: The Winter Soldier.

Would you watch a movie about Cap just reading a book about Watergate going "Guys, wtf?"And just what the heck is a Winter Soldier? Is it like a Summer Soldier, just in the Cold War? So what's Spring Soldier, like a mattress or something? OMG guys, sleeper cells!

All this plus Andrew's wife Ainsley tries to remember what the heck happened in this movie based on one viewing a while ago. Spoilers: Black Widow was in it.

It's game night at No Time for Heroics, and the guys are checking out Capcom's 1994 beat-em-up X-Men: Mutant Apocalypse for the Super Nintendo.

Shouldn't Apocalypse be in the game with his name on it? How pleasurable would a surprise encounter with the Brood on some cheery day be? Who's the treasurer of the Hellfire Club? Why is Gambit so... so cool you guys?

Nothing can stop the Juggernaut! But we did, I guess. Join us as we jump on the bandwagon and do our very first video game review!

Roger Ebert said about this movie "Shall I have feelings, or should I pretend to be cool?" and I guess we don't haven any feelings either, because we're just the coolest cats around, dig? Not like Ebert cool. Cooler than a jet pack, but not as cool as Nicolas Cage doing an Adam West impression. (So cool).

Come back with us to a time when newspapers had the death of Superman on the front page (beneath the fold) and Nicolas Cage was prime non-skullfaced hero potential with a documentary about what could have been, The Death of Superman Lives.

Is it possible that Superman Lives would've been a better movie than the ones we got? What is it about Kevin Spacey that makes everyone want to cast him as Lex Luthor? Are we the only ones okay with a movie in which Superman fights a giant space spider? How many people not in this movie have put Tim Burton in a headlock?

And hey, now that you've heard the episode, you should check out the documentary if you haven't already! You can pick it up in the format of your choice right here. It's a real labour of love on the part of director Jon Schnepp, so head over there and help support it! 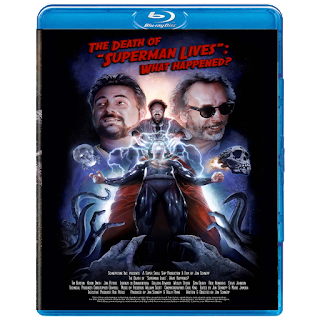 We take on The Strangest Super-Heroes of All (tm) and check outone of the movies responsible for making the cinema comic-friendly,2000's X-Men.

What do Canadians do for fun that isn't beating people to pulp in acage? What does this movie have to say of the influence of the homevideo market on theatrical cinema? Is "naked" a valid characterchoice?

To ME my X-Listeners! Oh wait, that sounds like ex- listeners. Andwe don't want that at all! For we just love you all so verymuch.