No Time For Heroics

A podcast about superhero movies, and some not-so-super hero movies. A funny, critical look at heroic fiction on screen from Republic serials to Imax blockbusters. If tights, capes, and close reads of pop culture are your thing, you're in the right place. New episode every Tuesday!
Email RSS Feed
No Time For Heroics
2018
June
May

This episode we launch FANTASTIC FEBRUARY a month of mighty (and minor) Marvel movies featuring the first family of funnybooks. And let me tell you, we've got a few Things to watch.

We're starting with the movie that failed to start it all, the 1994 unreleased, Roger Corman produced The Fantastic Four!

Have we uncovered a B-movie Marvel Cinematic Universe shared between this and Captain America II: Death too Soon? Why hasn't anyone done Police Academy: Xavier's School for Mutants yet? And let's be honest... how much better would this movie had been if Reed married Doom at the end.

We've got four big episodes featuring the fouringest heroes around! Check us out on facebook, and remember to help out the show by rating and reviewing it on whatever platform you found us!

On this episode film and media scholar Jill Butler joins us to check in with our ol' Uncle Sam, and see who must surely be the most primary Avenger of them all in Captain America: The First Avenger!

Is this the only superhero movie in this so-called golden age of superhero movies with damn superhero in it? What's with all this Hydra stuff? Weren't there some other bad guys we were fighting back then? #notmyworldwarII And hey Marvel what's wrong? Not MAN enough to call your Cosmic Cube a Cosmic Cube?

Do you want to kill Nazis? Well too bad, there aren't any in this movie. We asked for an army, and all we got was yeeu. All we got was EEEEEyoooooo. Sorry, I've been trying to say it like Tommy Lee Jones all night and it's just not happening.
Episode 26 - Generation X (1996) 0

Someone figure out the secret of the ooze, because No Time for Heroics is diving face first into a pile of mutant madness with the very first X-Men movie!

No, not that one. This ain't yer snikty-bamf X-Men, okay? This is the grungy, angsty, you-don't-understand-me-dad teen X-Men featured in Fox's movie of the week 1996's Generation X!

Okay, this isn't the "first" X-Men movie, but it certainly has the seed of that idea. You might say, it was the... inception of an X-Men franchise. In fact you could say following up on this movie was a dream crime. Or that it was starring Leonardo DiCaprio. Except that last part.

Welcome to Star-Lord Minute. It's the super-sized titanic cosmic team-up show, as No Time for Heroics welcomes Star Wars Minute hosts Pete the Retailer and Alex Robinson to discuss the most superheroic space opera of them all, 2014's Guardians of the Galaxy!

Could the planet Morag be in the same star system as the forest moon of Endor? Will we ever get closer than this to seeing a movie staring Eson the Searcher? Is Thanos ever going to get out of that chair he's been in for a dozen movies now?

All this and the true identity of Star-Lord's father! Then, head over to Star Wars Minute and listen to Pete and Alex bravely match wits with Jar Jar Binks as they tackle the Star Wars Prequels one minute at a time. They fight so we don't have to! 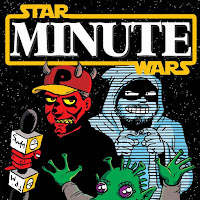 This muck-encrusted mockery of a podcast we take a look at Wes Craven's pre-Nightmare on Elm Street DC Comics adaptation Swamp Thing.

Is Alec Holland married to his sister in this? Why couldn't we have an awesome "Swamp Thing and Jude" spin off? Does Bruno's shirt possess an animalistic thirst for survival at the end of the movie? Who are any of these people?

This podcast is played as intricately and precisely as a perfect game played by a genius chess master. So jam it in your ears and lets visit the rubberiest of heroes, Swamp Thing!